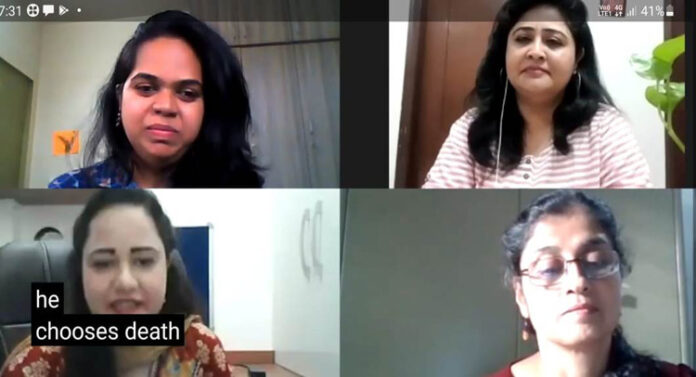 In the Webinar Associate Professor of Law from Bennett University, Dr Daksha Sharma was mainly the subject specialist. She have presented her allocution about the provisions of law preventing suicide in India of Mental Health Care Act, S.309 of the IPC, 1860 has been partially decriminalised. It is the remarkable legislation on ‘ Mental Health and Care’ introduced by the present Government.

During the deliberation, Dr Daksha Sharma significantly covered the aspect of the inclusion of ‘ Right to Die with dignity ‘ under ‘ Right to Life’ as per article 21 of the Indian Constitution the help of celebrated judgements on suicide as well as euthanasia.

The second episode was moderated by Ms Gayatri Chadwa, the Co- founder & Director of the foundation. The former principal Ms. Rajni julka emphasised on the need to have faculty empowerment programs and necessity to have life skill course at the school,college & University level so as imbilbe techniques of mllental Health issues of the students. She advocated that curriculum mapping should inclusive for Mental health issues.

The student from Believers Medical College, Tiruvalla, Ms. Anna George stated that social & emotional learning should be one the elements of our education. Every school should have a protocol as to low ‘Child at Trouble’ should be handled with care. She praised the present National Education Policy which aims to enhance the quality of education imparted to the student.

Newspaper is your news, entertainment, music fashion website. We provide you with the latest breaking news and videos straight from the entertainment industry. Fashion fades, only style remains the same. Fashion never stops. There are always projects, opportunities. Clothes mean nothing until someone lives in them.